An error occured when trying to instantiate a Percona PerconaXtraDBCluster on OpenShift 4.6.9. Operator was installed from the integrated OpenShift Operator Hub, and is the supported (non-community) version 1.6.0-2: 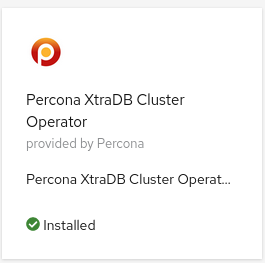 I created a secret called 'percona', with the following data in it:

The YAML I used for the instance is:

While installing, I first hit a small issue with the 'operator' key missing in the secret, but that was easily fixed (but not according to the documentation) by adding the key to the secret.

The second issue is one I cannot fix myself, and is this one:

I don't know if this error is specific to my environment or that it's a general issue with this version of the operator.

Votes:
Vote for this issue